Why is aliasing important to A/D converters?

To minimize aliasing an anti-aliasing filter is needed before an A/D converter. How do you design this pre-filter? What is this aliasing? Shannon, and Nyquist later, said that the maximum signal we can reconstruct is half of the sampling rate. If the signal we sample has components higher than 1/2 sampling rate then we get a phenomena called 'aliasing. If I were to send an aliased signal back out of a computer to a D/A converter it would look like the signal was 'shifted' in frequency.

Suppose a signal of Fs was put into an A/D converter and the sampling rate was Fs. It might appear on a D/A converter as a DC signal . 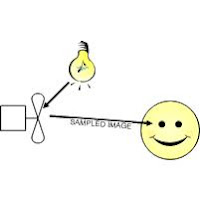 As an everyday example of aliasing, have you ever seen a moving fan appear still under a strobe light? When the strobe is blinking at the same rpm's as the fans rotational speed, the fan will appear motionless. The aliasing phenomena can occur if the sampled signal is at or above 1/2 the sampling rate OR IF IT HAS (Fourier) COMPONENTS AT OR ABOVE THIS RATE. In this case just those components above the Nyquist rate would be aliased, but the total signal, if reconstructed, will be distorted.

How do we design to this? Typically we use an anti-aliasing filter on the front end of the A/D. This filter is designed to attenuate signal above the Nyquist rate to below some noise level. It might be as simple as an RC or more complicated as a multi-pole active filter in a Chebychev or Butterworth configuration. The key is to understand how much attenuation we need at the stop band. Suppose our A/D is 12 bits. The ideal SNR is 72dB (= 20* log(4096)). The filter should be designed to provide 72 db of attenuation at the stop band. Now we note that a single pole filter provides 6db per octave of attenuation.

A single pole low pass filter designed to attenuate a signal to this noise specification would be designed to have a cutoff 12 octaves below half the A/D sampling rate!
at 6:54 PM

"A hundred times every day I remind myself that my inner and outer life are based on the labors of others" - Albert Einstein.

"Welcome to our Daddys laboratory. We think he is a funny man."